Mr Alan Beckett’s LifeBook autobiography
I Did It My Way

At LifeBook we take great pride in signing off each project, in full knowledge that, at the end of their journey, each author and their family will be able to enjoy the resulting private autobiography for years to come. This special moment also marks the end of the team’s six-month involvement with the project.

Listen to Alan talking about his experience with LifeBook’s founder Roy.

We were delighted when Alan kindly invited his project team out for lunch as a way of getting us all together to reflect on what has been a wonderful and interesting project.

Watch Alan’s speech during the meal.

Alan first heard about LifeBook when his grandson, Alex, searched for autobiography companies on the Internet. He gave his grandfather our number, and the rest, as they say, is history! Right from the start, Alan let us know exactly what he wanted to achieve with his project, and to enable this to happen, he asked us what we needed him to do ‒ and then he did it. 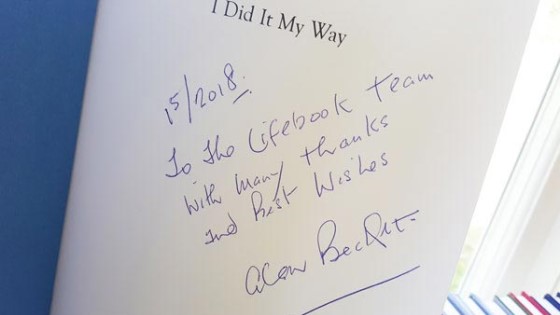 We recruit interviewers especially for each project based on their location and suitability for the role. This allows us to provide local interviewers for authors anywhere in the UK, and even all over the world. In this instance, we appointed Leisa, who brought a huge amount of experience to the interviewer role. She quickly established a good rhythm through the interviews, making it easy for Alan to share all the stories and memories he was keen to preserve.

Sarah, our ghostwriter, looked after the writing side of the project, and her ability to capture Alan’s voice in the book’s prose was evident right from the first review. With Halima at the editorial helm to support Sarah as she constructed the manuscript, the project team flew through the content interviews in just four months.

We loved to hear Alan in his element, recalling his stories decade by decade. There was laughter and sometimes tears, and everyone looked forward to discovering what the next interview would bring.

Through regular interviews and review sessions, Alan helped us fine-tune his manuscript as the book developed. We included a few of his favorite jokes at the end of certain chapters, found photographs that matched the stories he had told, and discussed with him which images would look best on the cover. Everybody worked in harmony while still making sure it was all done Alan’s way (as his book’s title would suggest)! Alan’s book has now been handed to his grandchildren, Alex and Matthew, to enjoy and pass on to future generations of Becketts. We hope that they will cherish the books for many years and that they now also know a little bit more about their grandfather’s life and where they came from. It just goes to show how much can happen in six months! Having committed my life story to print I feel much easier and happier. Alan Beckett, Memoir Author