LifeBook Does the Magnificent Royal Wedding

Everybody loves the spectacle of a magnificant royal wedding

Royal wedding fever hit the UK on 19th May and everyone is still talking about it. The LifeBook barn is buzzing about who wore what, how incredible Meghan Markle and Prince Harry looked together, and, yes, that minister. We also celebrated in style by arranging a tasty celebratory buffet spread: pork pies, Twiglets and a plethora of cakes, as well as reigniting that long-standing debate as to whether scones should be prepared with the jam or the clotted cream on top. I am firmly in the cream on top camp.

Everybody loves the spectacle of a royal wedding, as evidenced by the legions of well-wishers who lined the streets of Windsor. Many of our LifeBook authors have recounted stories on royal weddings and coronation, and many witnessed these events either in person or on their first television set. It isn’t just us British either! Amy, one of our American ghostwriters, tells us about her own royal wedding celebration. 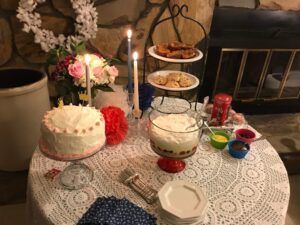 The question was never, “Should we watch the royal wedding?” but rather, “How early should we get up to watch the royal wedding?” It was still dark when my mom and I settled in to watch the wedding of Princess Diana and Prince Charles on July 29, 1981, and we woke before the birds once again on April 29, 2011, to see Kate Middleton marry Prince William. For Meghan and Harry? I set my alarm for 4:15am and my 19-year-old daughter, Gaby, and I were out of the door an hour later.

Mom and Dad’s house has a For Sale sign out front and is available by appointment to be seen. Despite that, Mom hosted our Royal Wedding Watch Champagne Breakfast. Tray tables were interspersed between comfy chairs in their family room and my dad had lugged in a round patio table from somewhere in hiding to a spot near the television. On the table were layered tablecloths, fresh flowers, blue and silver tapers in crystal candlesticks, and our breakfast spread. Red, white, and blue paper lanterns and paper pom-poms complemented the large Union Jack flag draped over Mom’s easy chair.

So many delicious options! With fabulous ideas and recipes from my LifeBook team members, Mom and I narrowed the menu to represent both American and British tastes. We had coffee, tea, a mimosa punch with hints of orange-flavored Triple Sec liqueur, and champagne at the ready. Dad, who is a morning person but who had no good reason to be up that early on a Saturday, made his family-famous popovers—crunchy on the outside and steaming on the inside, waiting to be filled with rich Irish butter, red raspberry jam, blackberry preserves, orange marmalade, apricot conserve, or mom’s homemade lemon curd.

Mom found “Eton Mess” chocolate bars and coconut-covered marshmallow “snowballs” at our local World Market store, and she made a sherry-laced strawberry-blackberry trifle along with her signature breakfast bake—a bubbly concoction of croissant pieces, sausage, egg, and cheese. Raspberry and white chocolate scones and toothsome egg, Swiss, and bacon tartlets were my offerings.

Then, there was the copycat wedding cake courtesy of Gaby! Delicate cream and lemon curd filling nestled between three layers infused with elderflower cordial, wrapped in elderflower and lemon essence buttercream, and sprinkled with sparkling sugar. It was gorgeous, inside and out!

Our Guests and Finery

In addition to Lord Jack and Lady Sharon of East Wind Lane and Gaby who declared herself Princess Gabrielle when she was two, we were joined by Baroness Roz Horowitz, mom’s next-door neighbor, my newlywed niece Countess Kelcey Dodson of Holly Springs, and Duchess Victoria Lydon of Southern Pines by way of Leeds, England! (Extra points for having a Brit present!) Loungewear and yoga pants featured heavily, along with a stunning black fascinator fashioned in Switzerland and worn by the Baroness, and my own less-than-stunning cream and gray monstroscinator crafted from vintage items that smelled like my attic…because they came from my attic.

Over the top? No way! We gathered at 6am and most of us had a cup of coffee and were wide awake as the Clooneys entered St. George’s Chapel and Oprah found her seat. We sat transfixed as Meghan, stunningly beautiful and bright, glided down the aisle attended by adorable children and we sighed a collective “awww” when Harry lifted her veil. We chuckled as our English guest was rendered speechless by Bishop Curry’s enthusiastic tribute to love, and we offered a champagne toast upon the first kiss of the Duke and Duchess of Sussex.

In the end, we were delightfully British for a day, and, predictably, Mom asked as we finished the dishes, “So, how early should we get up for Princess Eugenie’s wedding?”